Just to save a couple of dollars in the after thanksgiving sale called Black Friday a mob of shoppers trampled a temp employee to death upon store opening.  OMG!!  Eventhough I don’t live in NY where this happened I wouldn’t even dream of doing that. OK-provided the people from the back of the crowd doesnt know what was going on and kept on pushing to get in while the people in the front line kept on pushing back-well you know the usual scenario..wow..  anyways..here’s the full story from cnn. 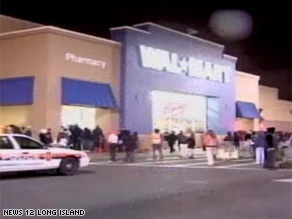 The family of a man trampled to death in a New York Wal-Mart on Friday filed a lawsuit Wednesday, claiming the store failed to control the crowd pushing to gain entry on one of the busiest shopping days of the year.

Jdimytai Damour, 34, a temporary worker, was crushed as he and other employees tried to unlock the doors of the Wal-Mart at Green Acres Mall.

The lawsuit alleges that Damour’s death was caused by the “wanton disregard for public safety and gross negligence of the defendants.”

Hecht also filed a notice of claim against Nassau County to preserve the family’s right to file a lawsuit against its police department.

“When they heard of how he was eventually killed, that he died of asphyxiation, they were visibly shaken. They are angry because this was preventable, and have therefore exercised their right to seek justice in the court,” Hecht said in a written statement.
The family is making funeral arrangements for Damour, Hecht said.

“They appreciate the outpouring of sympathy from across the country. They are terribly upset about what happened to their family member,” Hecht said.

On Tuesday, lawyers said two Nassau County men who claim they were injured at the store also are suing Wal-Mart. Their lawyers also filed a notice of a $2 million claim against the Nassau County Police Department.

The mall’s owners, Vornado Realty Trust, refused comment on the lawsuit in a statement issued Wednesday.

“We are saddened by the tragic occurrence, but we do not comment on pending or threatened litigation,” the company said.
Hank Mullany, Wal-Mart’s northeast division president, released a statement about Damour’s death Wednesday, which began by saying that Thursday morning, the company will release November’s sales numbers.

“This event is overshadowed by the tragic death of Jdimytai Damour at our Valley Stream, New York, store. We have been in communication with members of his family to do what we can to help them through this difficult time,” the statement said. “We will continue to work with local law enforcement officials so that together we can implement even stronger safety measures going forward.”

This site uses Akismet to reduce spam. Learn how your comment data is processed.

think not of what was..but what it will be..